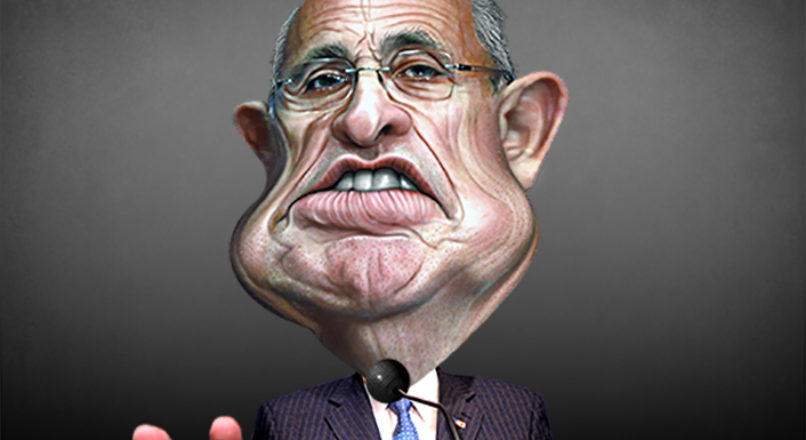 Viewers of the Sunday talk shows have become used to regular visits from President Trump’s personal lawyer Rudolph W. Giuliani. These appearances have consistently featured hyperbole and half-truths in performances that would embarrass most White Houses. This Sunday was no exception.

Asked whether special counsel Robert S. Mueller III would be able to interview Trump, Giuliani told NBC’s Chuck Todd, “We would not recommend an interview for the president unless they can satisfy us that there’s some basis for this investigation.” Giuliani clarified further to ABC’s George Stephanopolous that the president’s lawyers weren’t asking for “evidence of a crime” but merely “a factual basis for the investigation.”

A factual basis? How about, as Todd noted, the president’s own lawyers admitting that Trump “dictated” his son Donald Trump Jr.’s misleading statement about the now-infamous 2016 meeting between Donald Jr. and a Russian lawyer promising dirt on Hillary Clinton? Giuliani responded by claiming, “all she did was talk about adoptions,” only for Todd to jump in and point out that “we don’t know that” and “the story changed three times.”

And if that’s not enough, what about the president telling NBC’s Lester Holt he was thinking of “this Russia thing” when he fired then-FBI Director James B. Comey? Or the president’s April tweet saying there was “No Collusion or Obstruction (other than I fight back)“? [Emphasis added.] (Unfortunately for Trump, there is no “fighting back” exception to obstruction of justice.) Or a half-dozen other valid reasons for the investigation?

Which brings us to the other half of the game Giuliani and others are playing: No “factual basis” will be accepted as valid because they’ve decided Mueller’s probe is biased. “This is the most corrupt investigation I have ever seen,” Giuliani told Stephanopolous.

Here the president’s lawyer again played fast and loose with facts. On CNN he pretended to host Dana Bash that Justice Department Inspector General Michael Horowitz “suggested [the Mueller probe] was influenced initially by bias,” only for Bash to clarify that Horowitz was speaking about the Hillary Clinton email investigation. (Bash didn’t mention Horowitz’s conclusion that said bias did not affect that investigation’s outcome.)

Giuliani and other presidential mouthpieces are relying on circular logic. Mueller doesn’t have a “factual basis” for investigating the president. Any factual basis that could be cited is irredeemably tainted by “bias.” And because there’s no factual basis, that’s more proof that the investigation must have sprung out of bias. Around and around it goes.

So if Giuliani’s interviews are consistently exercises in deception, why should the networks continue to book him? First, just as many media outlets had to relax their attitudes on publishing profanity after the president spoke of “shithole” countries, so his White House’s frequency of misstatements, half-truths and outright deceptions force a (hopefully temporary) change to the standards of what to expect from guests representing the president.

Second, as my colleague Erik Wemple said about Sarah Huckabee Sanders’s press briefing, Giuliani’s answers are may be “maddening,” but at least they are on the record. Unlike the dozens of Trump officials who leak anonymously to defend the president or themselves, Giuliani can be held accountable for his words, either in the moment or down the road. (Witness Todd and Bash correcting him in separate interviews.) That may be of little comfort to many Americans, but these days “little” is about as much comfort as we can expect.