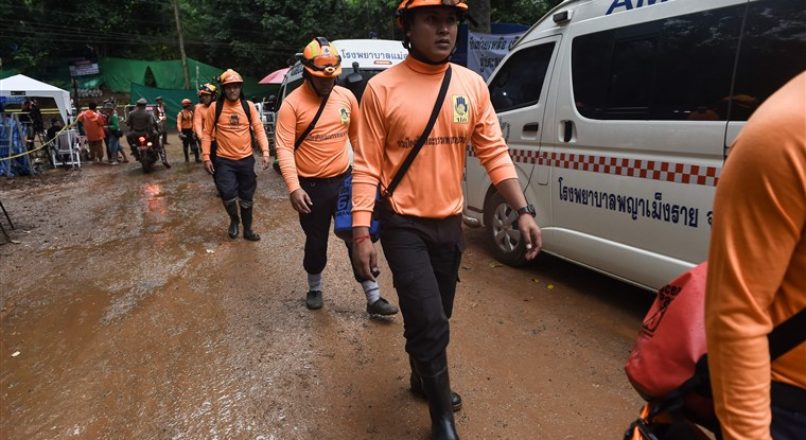 President Donald Trump said on Sunday morning that the U.S. “is working very closely with the Government of Thailand to help get all of the children out of the cave and to safety.”

“Very brave and talented people!” he said on Twitter.

The rescue effort progressed much quicker than expected, with a reporter at the scene — one of the few allowed access to the site by the cave entrance by Thai authorities — apparently told by rescue teams that lowered water levels (up to nearly a foot since Saturday) had shortened the journey out of the cave and made much of the route walkable.

Some of the children are poor swimmers, prompting earlier warnings that the nearly three-mile journey out of the cave could take as long as two to four days to complete.

The 12 boys — ages 11 to 16 — entered the massive cave complex on the frontier of Thailand and Myanmar with their 25-year-old coach on June 23. The group became stranded after torrential monsoon rains caused the system to flood and were missing for nine days before being discovered by two British divers.

The resilience of the boys and their coach captured the imagination of a global audience. Before their discovery, they subsisted by licking drops of water off the cave wall.

The mood lifted after the team was found, but elation at their discovery quickly turned to fear as authorities mulled over several rescue options — all of them fraught with danger.

A daredevil swoop for the team through holes drilled in the ceiling of the chamber was considered. So too was the alternative of keeping the boys and their coach in the cave supplied with provisions until the waters receded.

Elon Musk even got in the act, sending Space X and Boring Company engineers to Thailand to explore ways to help and offering to build a “kid sized submarine” to rescue the teens.

Eventually authorities went with what they deemed to be their most logical option.

Rescue workers are seen at the Tham Luang cave area where 12 boys and their coach are trapped in the Chiang Rai province of Thailand on July 8, 2018.LILLIAN SUWANRUMPHA / AFP – Getty Images

Throughout the drama of the last few days, the group have remained resolute. A series of letters sent out through divers Saturday expressed love to their families, a desire for tasty food and hope that they would survive the ordeal and be out soon.

Speculation that the long-awaited operation was about to happen had been building since the early hours on Sunday.

Reporters approaching the muddy camp at the entrance to the cave where they have been stationed during the drama along with first responders, rescue workers, officials and a legion of yellow-shirted volunteers, were prevented from entering by police.

The atmosphere was charged with excitement even before the governor made public the decision to act.

In Mae Sai, the town closest to the cave, locals too were cautiously hopeful about the possibility that the boys and their coach may soon be back above ground.

“It seems positive,” said one shopkeeper. “It’s been awful for the boys and their families and everybody in this community is desperate to see them safe and sound.”