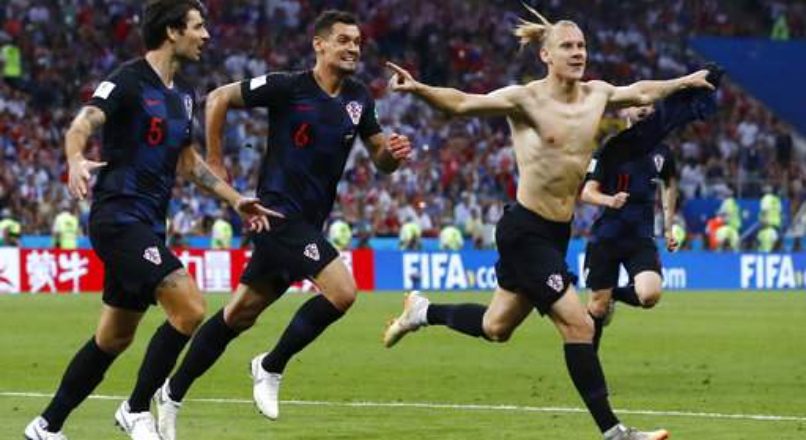 Croatia’s Domagoj Vida, right, celebrates with his teammates after scoring his side’s second goalduring the quarterfinal match between Russia and Croatia at the 2018 soccer World Cup in the Fisht Stadium, in Sochi, Russia, Saturday, July 7, 2018. (AP Photo/Manu Fernandez), The Associated Press

MOSCOW (AP) — The World Cup rulings in FIFA’s disciplinary court have not always been easy to comprehend.

Sweden was slugged 70,000 Swiss francs ($70,700) for players wearing non-approved socks, and Croatia was hit with the same monetary penalty when a player took a non-sponsor’s drink onto the field.

Yet a Russia fan’s neo-Nazi banner and a Serbian World War Two-era nationalist symbol waved inside venue drew only 10,000 Swiss francs ($10,100) fines, paid by their national soccer bodies which are responsible for fan misconduct at games.

Commercial rules can seem to be enforced more strictly than bad behavior, and Argentine great Diego Maradona appears to enjoy a unique code of conduct of his own.

At times, the priorities and consistency in FIFA decisions can look a curious form of World Cup justice. Even before the World Cup, FIFA was criticized by the anti-discrimination group Kick It Out for prioritizing commercial gain over eliminating racism from the sport.

“A financial sanction is always heavy in a commercial case because exclusivity is something Coca-Cola or Adidas pays millions of dollars for,” Kitching, the former head of sports legal affairs at the Asian Football Confederation, told The Associated Press.

The $70,000 fines imposed on Sweden and Croatia followed repeated warnings from FIFA.

“It’s a sensible solution,” Kitching said of the heavy fines. “If they are not seen to protect it (sponsor exclusivity), they put everything at risk.”

A group of women sat together in matching orange mini-dresses during a game at Johannesburg in the colors of the brewery. The case was dropped only with the brewery promising not to try a similar stunt at a future World Cup.

FIFA dismissed a suggestion that 70,000 Swiss francs ($70,700) was a baseline figure for breaking commercial rules.

A further six-figure sum must be paid by federations and players in mandatory fines for on-field conduct. Teams due to pay 15,000 Swiss francs ($15,150) for getting five yellow cards in a game, rising by 3,000 Swiss francs ($3,300) for subsequent bookings, include Argentina, Colombia and Morocco.

Argentina is set to pay the highest World Cup fine for a second straight tournament, even though it exited in the round of 16.

A 105,000 Swiss francs ($106,000) penalty was for a range of offenses by fans at a demoralizing 3-0 loss against Croatia, topped by several men being filmed punching and kicking a Croatia-shirted fan in a walkway from the grandstand.

Four years ago, Argentina officials were to blame for breaking media rules by not bringing a player to mandatory pre-match press conferences at the stadium. For defying warnings and repeating the offense at four straight games, FIFA fined Argentina 300,000 Swiss francs ($303,000).

“Media obligations are part of the game,” Kitching said. “That is what broadcast rights holders are paying for — this access.”

The money due to settle disciplinary cases is added to FIFA’s development budget totaling hundreds of millions each year.

Skeptics could point to the fines helping for the “relevant development projects” cited by FIFA last year to explain Maradona’s new ambassador duty. It brought the often-volatile Argentine back into the fold after years of public spats with previous FIFA leaders and the consequences were easily seen in Russia.

Maradona’s double middle-finger gesture celebrating a late winning goal for Argentina against Nigeria was seen globally in the official FIFA broadcast. A similar gesture by England’s Dele Alli in a World Cup qualifying game last year led FIFA to ban him for the next qualifier.

Croatia defender Domagoj Vida was only warned Sunday for a social media post with comments celebrating Ukraine after helping his team eliminate Russia in the quarterfinals. Before the 2014 World Cup, FIFA banned Croatia’s Josip Simunic for 10 games for leading fans in a nationalist chant after a qualification playoff.

Apparently there’s no consistency, although Kitching suggests: “There has been a shift perhaps on how (FIFA) have treated such cases.”