Dad tosses baby off bridge and taunts mother before doing so 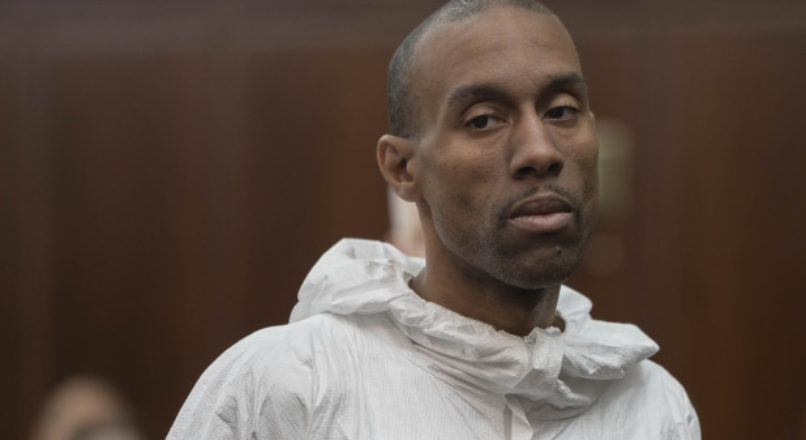 Dad tosses baby off bridge and taunts mother before doing so

Dad tosses baby off bridge and taunts mother before doing so…

The father of the infant found floating in the East River over the weekend arrived in NYC late Thursday to face charges. The 37-year-old man said nothing to the crowd of reporters who yelled, “What happened to your son?” as he was led from a police precinct. The baby, Mason Saldana, was discovered near the Manhattan side of the Brooklyn Bridge Sunday just after 4 p.m. by a tourist from Oklahoma.

The father accused of dumping his 7-month-old son in the East River and fleeing overseas sent taunting text messages to the baby’s frantic mother, including one that read “You will never see Mason again,” according to a criminal complaint revealed at his arraignment Friday.

James Currie, of Co-Op City, also allegedly texted the boy’s mother, “The good news we [sic] will never see each other again,” and “I am not in the usa” after he arrived in Thailand, where he was apprehended days after his son’s body was pulled from the water by a tourist from Oklahoma. Currie, 37, is charged with concealment of a human corpse in the case of his son, Mason Saldana.  Additional charges could be filed pending an autopsy, though a determination on the baby’s cause of death is not expected this week. It wasn’t clear if he entered a plea at his arraignment in Manhattan.

After court, his attorney Norman Williams said, “Everybody needs to keep an open mind and not convict this man until they see evidence that he did something wrong.”
Earlier, Currie said nothing to reporters who repeatedly yelled, “What happened to your baby? What happened to your son?” as he was led, hands cuffed behind his back, from Manhattan’s 13th Precinct en route to his court hearing. Wearing a stark white jumpsuit, Currie shuffled past the media throng, his head down, as two officers escorted him to a waiting SUV.

Currie landed at Kennedy Airport on a Korean Airlines flight Thursday night. He had tried to flee the country following the discovery of his son’s body, and was apprehended in Thailand, law enforcement sources have said. Homeland Security Investigations, NYPD and Customs and Border Protection worked together to track him overseas and bring him back to the U.S.

Exclusive video obtained by News 4 shows a handcuffed Currie being led to a swarm of agents waiting on the jetbridge after his plane landed Thursday. He complied with orders to put his hands behind his head and stood silently as an officer placed a chain around him, then led him off the plane, the video shows.

His baby boy, who was born in January, was alive when he was exchanged between the mother and father at the mother’s residence around 12:30 p.m. on Saturday, NYPD Chief Dermot Shea previously said. About 24 hours later, when the child’s father was seen leaving his home with a backpack covered with a blanket, fashioned as a baby carrier, the baby was likely dead, officials said.

MTA records show Currie, an employee with the agency, was issued a MetroCard and that MetroCard was used to board a bus in the Bronx. It was used again in Manhattan, at 23rd Street. Currie was then seen walking in lower Manhattan, between South Street Seaport and Wall Street Heliport, around 3:10 p.m. with the backpack, officials say. According to a criminal complaint, the MetroCard was used about 54 minutes later to enter the transit system at Chambers Street. Video surveillance showed him enter the transit system — the blanket that had been covering his chest was gone and he had no baby with him.

The baby’s mother allegedly attempted to get in touch with Currie before sensing something was amiss, and she contacted authorities Monday night.  During the “bloodcurdling” call to 911, the mother said the child was not dropped off at day care, Shea said, adding that she’d heard about the child in the water, feared the worst and started crying. It was because of this call that authorities were able to identify the child found in the river. According to officials, there was a court-stipulated agreement for visitation involving the parents, who were not legally married, and the child, but there were no red flags.